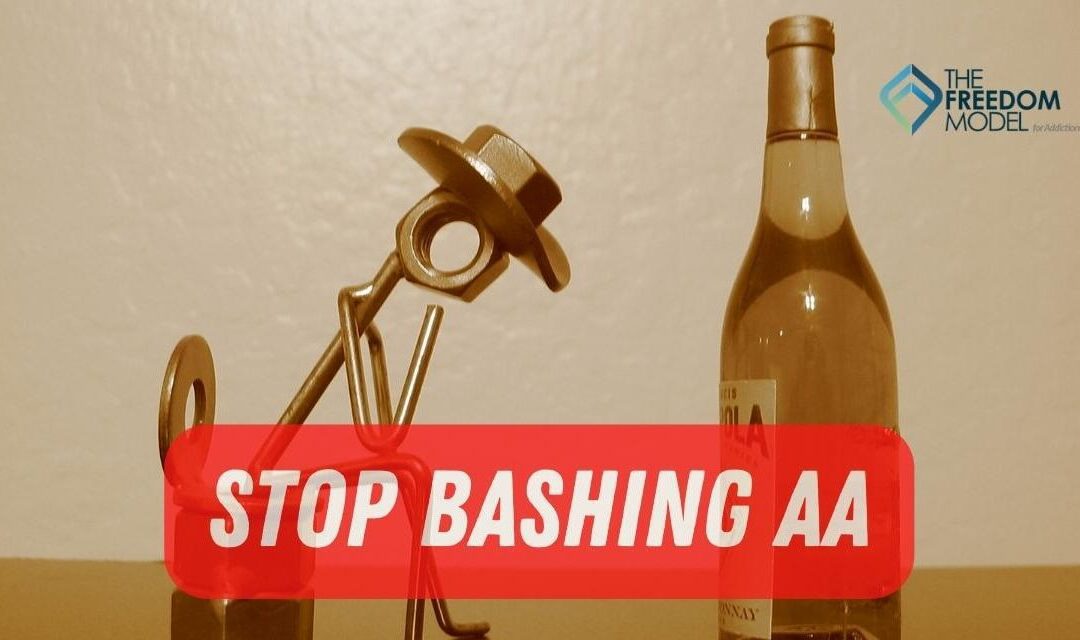 “Why do you guys have to bash AA so much?” For more than 30 years I’ve heard people say this, or something like it to me and my colleagues here at the Freedom Model. It’s an interesting question. Curiously, the wording of this inquiry is almost always the same, even though it’s being said from unrelated parties from all parts of the globe. This shows us that there is a fairly universal perception out there; these people are not happy with our analysis of the original 12 step group, Alcoholics Anonymous, and more importantly, it shows that they take these critiques of AA very personally.

First, do we bash AA? Many AA members and their families think we do. But here is the truth – we don’t bash AA as a whole, but rather, we bash the lies that AA as an organization promotes. However, the line between AA’s dogma and the AA member’s personal identity as a member are easily blurred, and so any attack on AA’s structure or dogma is easily seen as a direct attack on the membership and their chances of maintaining their “recovery.” It all becomes terribly personal.

Most AA members do not know that the ideas they are promoting within AA are rooted in harmful misinformation; they don’t know it’s hurting them and others – thus they quite naturally, and with little thought, defend it. After all, for many, AA is seen as the only remedy for the “suffering alcoholics” of the world. So to criticize such a movement is tantamount to heresy. And, from their point of view, if AA dogma is universally helpful, then anyone who criticizes it is easily cast into the pool of those who are dangerous, irresponsible and even outwardly cruel. From this perspective, it makes perfect sense to rally against such criticism or “bashing” as they put it. And like so many who project their fears and anger onto others, the AA member will accuse AA critics of being over-emotional, angry anti-12 step monsters, when in fact they are nothing of the sort. I know because I’ve been called these horrible things for decades, and in spite of it, I have no hard feelings whatsoever towards the people who support the 12 steps as their solution to addiction.

My criticism of Alcoholics Anonymous and treatment based on it does not equal anger or hatred. I have nothing against the people of AA (and I can speak for my colleagues, Michelle Dunbar and Steven Slate here as well). Let me say that again, we have nothing against AA members. Heck, Michelle Dunbar and I spent most of our lives up to the age of 30 involved in some form of 12 step recovery and/or treatment community. Believe me, I’m no stranger to 12 step dogma, and neither are my colleagues who co-wrote and co-developed the Freedom Model with me. What you hear when we are hammering away at 12 step ideas and teachings is a researcher’s natural disdain for active distribution of misleading concepts that have needlessly lead millions down a path of confusion and tragedy for more than 80 years now. I’m able to separate the people of AA, from the dogma of AA. However, the 12 step believers cannot seem to make that distinction in the other direction. This is no small point. I’ve been called a murderer, have received tons of hate mail from all corners of the globe, had my home vandalized, and have received threats of violence against myself, my colleagues, and my family because I went against the “science of AA”. To the ardent AA member, any criticism is personal.

So how can we criticize the misinformation factory that is AA, and do it without offending some people? There is no easy answer here. Until every person in AA understands that the information being peddled by their model is heavily weighted in myths and magic, I don’t think I or my colleagues will be able to avoid being seen by AA members as heretics who are dangerous and irresponsible. This has never been truer than it is today as we live in an age of canceling dissenting ideas and information. With respect to cancel culture, the cult of AA and its members were way ahead of the curve.

It’s important to understand that one of the characteristics of a cult is that it is set up to perpetuate itself, largely through fear mongering and systematically stamping out dissenting opinions, critical examinations, and any information that counters the dogma. Members of the cult are groomed to distrust and fear anyone who would dare question what they have been told is saving their lives. This creates strong reasons many members will see us as monsters threatening their very lives, instead of seeing us for who we really are, researchers who are questioning certain ideas and information. Because of these reasons, the accusations that we are “AA bashers” will continue as long as AA exists. And I’m OK with that. I know that ultimately, when the truth survives and wins the day, (as it always does given enough time and effort) the people in AA will understand that we were never bashing them personally, but rather we were bashing the absence of facts and the immense damaging mythology that is the entire basis of the 12 step model. Ultimately we will be seen for who we really are; not emotionally driven heretics, but rather researchers who were trying to free them from a cult that cast them into a self-created recovery trap.

To learn more about The Freedom Model or the St. Jude Retreat, call us direct and confidentially at 888-424-2626

WATCH A VIDEO REVIEW ON THIS ARTICLE

Watch Certified Freedom Model Private Instructor, Matthew Sparks, give a detailed review and reaction of this article to further elaborate on it and offer another interesting perspective.

Feel free to let us know your thoughts on the article as well!