Promoting Self Change, Through Awareness

Research suggests that an initial positive encouraging message may be all you need to change your substance abuse habits.  In fact, the stuff that comes later – the actual program of recovery and follow up material may not matter at all.  This is according to a study done by some of my absolute favorite researchers, Mark and Linda Sobell.  The Sobells have been studying what they call “natural recovery” or “self-change” for a long time.  Their basic finding (which has been replicated by other researchers) has been that 75% of people recover from substance abuse problems on their own, without treatment or 12-step involvement.  They’ve also found the major factor reported by these self-changers to be “cognitive appraisal” – which is a fancy way of saying that these substance abusing self-changers weighed the pros and cons of their behavior, decided in favor of quitting (or moderating use), and proceeded to successfully quit or moderate.The Sobells did a study called Promoting Self Change (PSC) back in 1996 (I). They recruited heavy drinkers with a newspaper ad, and split them into 2 groups:

All of this was done over the phone and through the mail.  The goal was to see if their personalized advice and cognitive exercises would increase the rate of recovery.  Unfortunately – it didn’t.  There was absolutely no difference in the rate of recovery – the subjects who just received pamphlets, did just as well as those who got full personal feedback, advice, and exercises designed to promote recovery.  The upside though, was that both groups showed a significant rate of recovery.  So they did some follow up interviews and found that the majority of subjects felt like they really began to change after seeing the ad, but before receiving the study materials in the mail.  Here’s what the ad looked like: 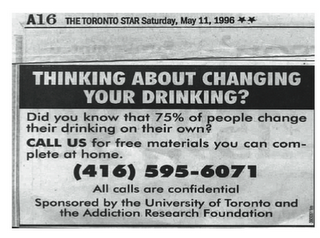 When they asked what convinced them to call and participate in the study, a majority said it was one of the first 2 lines in the ad.  The authors draw this conclusion:

one possible explanation for why PSC participants changed their drinking behavior when they saw the ad is that while they had been thinking about changing their drinking (motivational tension), like many people in the general public they did not know or believe that problem drinkers do not have to enter treatment in order to change. Thus, seeing the ad functioned as a catalyst (i.e., trigger) to implement a self-change process.

Just learning that you can change, may be all you need to end your substance abuse problem.  That’s why I shout down the disease propagandists, the 12-steppers, and the entrenched treatment ideas.  I shout them down because they’re hurting people – they’re convincing us that we can’t change.  We can change.  I know so many people who have done it.  There are multiple studies showing that 75% of people do it without a treatment program. You can do it.  Your loved one struggling with substance abuse can do it.  We just need to believe in them and show them a positive example that it can be done.  You don’t have to be an addict or alcoholic for the rest of your life.
I’ve decided a goal of this blog will be to showcase profiles of self-changers.  If you are a self-changer or know one – please contact me at selfchanger@gmail.com so I can interview you and use your story to help others.

BTW, A follow up study is being conducted.  You can learn about it here: http://www.thirdage.com/hc/ct/60243/clinical-trial-listing