[Note: I noticed many people come here to find out whether or not there is a connection between Passages treatment centers and Scientology or the Narconon treatment centers affiliated with the Scientology movement. My opinion is that Passages has nothing to do with Scientology. The founders of Passages haven’t indicated any connection that I have heard. I have a close friend who attended and has said nothing about Scientology. And I see no reason to believe they are affiliated. In fact, I see a powerful indicator that they would never be affiliated. As you may or may not know, the scientologists don’t hold psychiatry/therapy in high regard. In fact, they seem to hate the whole field. Passages and the Prentiss family, on the other hand, seem to love modern psychiatry/therapy. In their book, The Alcoholism and Addiction Cure, they recommend a laundry list of therapists that you’ll need in order to maintain recovery / address the “underlying causes of addiction.” In Scientology, most of what normal people would go to therapists and psychiatrists for help with is addressed with what the scientologists call “auditing.” Thus, if Passages were a back door to Scientology, it would be a piss poor one, since it actively directs people toward “auditing’s” competition. Yes, Passages invests heavily in the whole “toxins” thing, and that should be a red flag – but plenty of people who know nothing about scientology believe in this toxin nonsense. I think some people may also believe there is a scientology link because Passages espouses the belief that addiction is not a disease, and they have this in common with Narconon. There are plenty of people who hold this view, and again, know nothing about scientology. Then, there are supposed call scripts for those working the addiction help lines for Narconon. Some dedicated anti-scientology folks found and published these scripts in which the telemarketer makes a point to put down Narconon’s competition, specifically mentioning Passages (LINK). While I hold a low opinion of Passages and I do not think they offer a good solution, and in fact I think their focus on “underlying causes/conditions” is counterproductive – I still have no reason to believe that they are affiliated with Narconon or Scientology. added 4/7/14]

I’m constantly warning my readers to avoid the path of conventional addiction treatment programs, so I’m sure that many of you hop on google and search for ‘alternative addiction treatments’ to go to or send your loved ones to.  Unfortunately, most of what you’ll find in the way of alternative treatments aren’t the alternative at all, they’re usually the same old same ol’, or packed with an even higher degree of mysticism and spiritual mumbo jumbo.  In this series, I’ll expose the fakes for what they are, and clue you in to the warning signs which should raise red flags and let you know that you’re being marketed more of the same – snake oil. 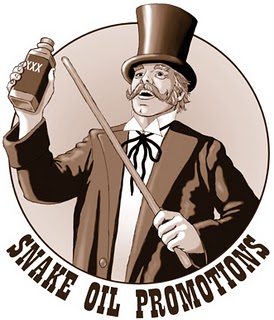 To find an alternative to anything, you must establish a baseline of what is the norm.  Fortunately (and unfortunately) it’s easy to see what is the norm in addiction treatment.  Most treatment programs in this country believe that addiction is a disease which causes compulsive substance use.  All 12 step programs also adhere to the same disease theory, and fully 95% of treatment programs either teach the 12-steps explicitly, bring you to 12-step meetings during your stay, or strongly advise that you attend 12-step groups as ‘aftercare’ for your treatment.  So, the disease theory is the norm, it is at the core of conventional treatment methods, and most programs have the stated goal of teaching their clients this theory.  Moreover, there are myriad ideas which have logically sprung from and follow this theory – such as learning how to ‘cope’ with your disease, being in lifelong recovery rather than becoming recovered, paranoia over so-called ‘triggers’, relapse as a part of recovery, and so on.

The disease theory is false.  It is unproven.  It is bad science.  Furthermore, the treatment offered for the disease has failed at showing any positive results.  People go in and out of treatment programs all the time without finding success.  The public has begun to catch on, and the treatment centers have followed, thus they’ve rebranded, offering “alternatives” to conventional treatment.  But like a salad at a fast food restaurant which contains more fat and calories than a cheeseburger, these alternatives are just more of the same garbage.

To spot a fake alternative you’ve gotta examine the essential conceptual flaws of the disease theory.  In reality, addiction is made up of a string of poor choices and beliefs which lead the addict to view altered states of consciousness as being better and more enjoyable than simply being in touch with reality and working for your own happiness.  The disease theory throws out this possibility, and claims that the addicts behavior is the result of something beyond their volitional control, that it comes from a mysterious ‘disease’.  The disease theory robs the substance abuser of the chance to see that they are creating their own problems, and provides an excuse: “I’m diseased”.  The susbstance abuser then sees their desire for heavy substance abuse as an inevitable fact of life, something they will always have, that they must live with forever, and that they will periodically succumb to.  They see it as out of their control, caused by an external force.

We do not believe in the concept that alcoholism and addiction are diseases and worse, incurable diseases. We do not talk to you or your loved one about “your incurable disease.” That is destructive, untrue, and deprives you of hope.

But then they go on to say that they examine “the vitamin and mineral content in each client’s body to determine if there is any deficiency that may be causing him or her to self-medicate.”  So right there, they’ve tipped their hat.  They’ve told us in one breath that they don’t believe the disease theory, and in the next breath they tell us that vitamin deficiencies are causing the substance abusers behavior.  Conceptually, this idea is analogous to, and as dangerous, as the disease theory itself.  Then they list a bunch of health conditions (such as fatigue, anxiety, and headaches) and their relations to vitamin deficiencies and state that:

Any of the above conditions can be the direct cause of our using drugs or alcohol to cope with the feelings that arise within us from those conditions. Failure to correct those deficiencies will almost always lead to failure of treatment and later relapse.

And now we’re getting the picture that these people don’t just think it’s a good side issue to address nutrition, they actually believe that vitamin deficiencies cause addiction.  This places the problem of substance abuse outside of the realm of conscious volitional decision-making, and into an external realm of “things my body makes me do”.  Of course, they have solutions for this:

Passages offers acupressure, acupuncture, Swedish massage, deep tissue, and Reiki (energy cleansing). The purpose of these types of bodywork is to relieve our bodies from physical pain, and to clear our fatty tissues and muscle tissues from toxins that have been left behind from our alcoholism or drug use.

Drugs and alcohol flow through our blood stream leaving behind unhealthy substances that are stored in our muscle and fatty tissues. In addition to this, our muscles have memory that can hold onto trauma and that can later cause us physical pain and even relapse. It is essential for successful treatment that we obtain release from past trauma and from the toxins that we have stored in our bodies. At Passages we use ancient and modern techniques to stimulate the three hundred sixty-one tsubos (pressure points) along the body’s fourteen meridians (nerve pathways or channels through which the body’s energy flows) to bring relief to our clients, improve circulation to the organs, balance energy, relieve tension, release stored toxin from the cells, and improve all bodily functions. If the toxins are not released and old trauma addressed, relapse is far more likely. We provide four one-hour bodywork sessions each week. Passages is the only residential treatment center that includes all those essential treatment components as part of our program.

“TOXINS” is a HUGE red flag.  When someone tells you that your addiction will be cured by removing toxins from your body – run the other way fast.  Your muscles hold bad memories that cause relapse?  Three hundred sixty psubos?  This is mystical mumbo jumbo.  There is no doubt in my mind that physical health can make life easier & improve your mood, and that this will spill over to some degree into your mental health and ability to make better decisions, but these people are not saying that, they’re saying that your problem will be solved by addressing nutrition and bad energy and getting massaged.  These people are not offering an alternative to conventional treatment or the disease theory itself – they are giving you a nearly identical poison: the idea that toxins, bad energy, and vitamin deficiencies are causing your behavior.  You are causing your behavior.  You can change it with clear thinking.  Go find a true alternative program, one that offers constructive ideas based in reality, I’ve got some listed on my help page.