Addiction: A Disorder of Choice

There’s a great interview with Gene Heyman, the author of Addiction: A Disorder of Choice available on NPR follow this link to listen to it, and learn about Heyman’s extremely important work: 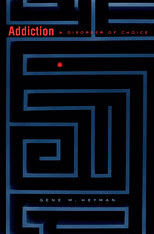 Another guest on the show, Hazelden’s Marvin Seppala, went on and on about research done on rats, a practice which I found totally absurd.  To take such research seriously as a representation of the nature of addiction for humans you must suspend any knowledge you have of the essential characteristics of man.  You have to ignore the factor of rationality and the ability to formulate and carry out complex goals that men possess.  You must ignore the difference between men and animals in order to believe what Seppala is saying.

Then, Nora Volkow, director of the NIDA, chimes in at the end (at the 40 minute mark, if you want to listen to her nonsense yourself) )with what I believe to be 2 contradictory claims directly on top of one another.  She is asked what she thinks of Heyman’s claim that addiction is a choice and she says that the areas of the brain responsible for decision making are so compromised by addiction that the addict literally doesn’t have the capacity to choose to stop.  Then she claims that the disease theory doesn’t remove responsibility for recovery from the addict – that they are still responsible for being aware of and avoiding the risks of their behavior and for choosing to undergo treatment.  But if mental capacity is so diminished that we can’t expect them to choose to stop, then how can we reasonably expect them to choose to attend a treatment program, or avoid triggers, or avoid whatever other conditions she believes puts them at risk?  Both such choices would require the addict to see that their behavior is not worth the consequences and take steps to change the behavior.  How can she honestly say that one could choose to attend a treatment program with the long term goal of ending their addiction, but they couldn’t choose to replace drug taking with an alternative, or simply choose to not take a drug with the long term goal of ending their addiction in mind?  What is the essential difference between these choices?  Do they happen in totally different areas of the brain?  Has she pinpointed with a brain scan where one choice would happen and where the other one would happen, and subsequently shown that one of those areas is totally dysfunctional and the other is functional?  The addict is either capable or incapable of making these choices, but they can’t be both at the same time.  Ms Volkow is guilty of trying to have her cake and eat it too.

The world of the disease theory propagandist is full of contradictions and logical inconsistencies.